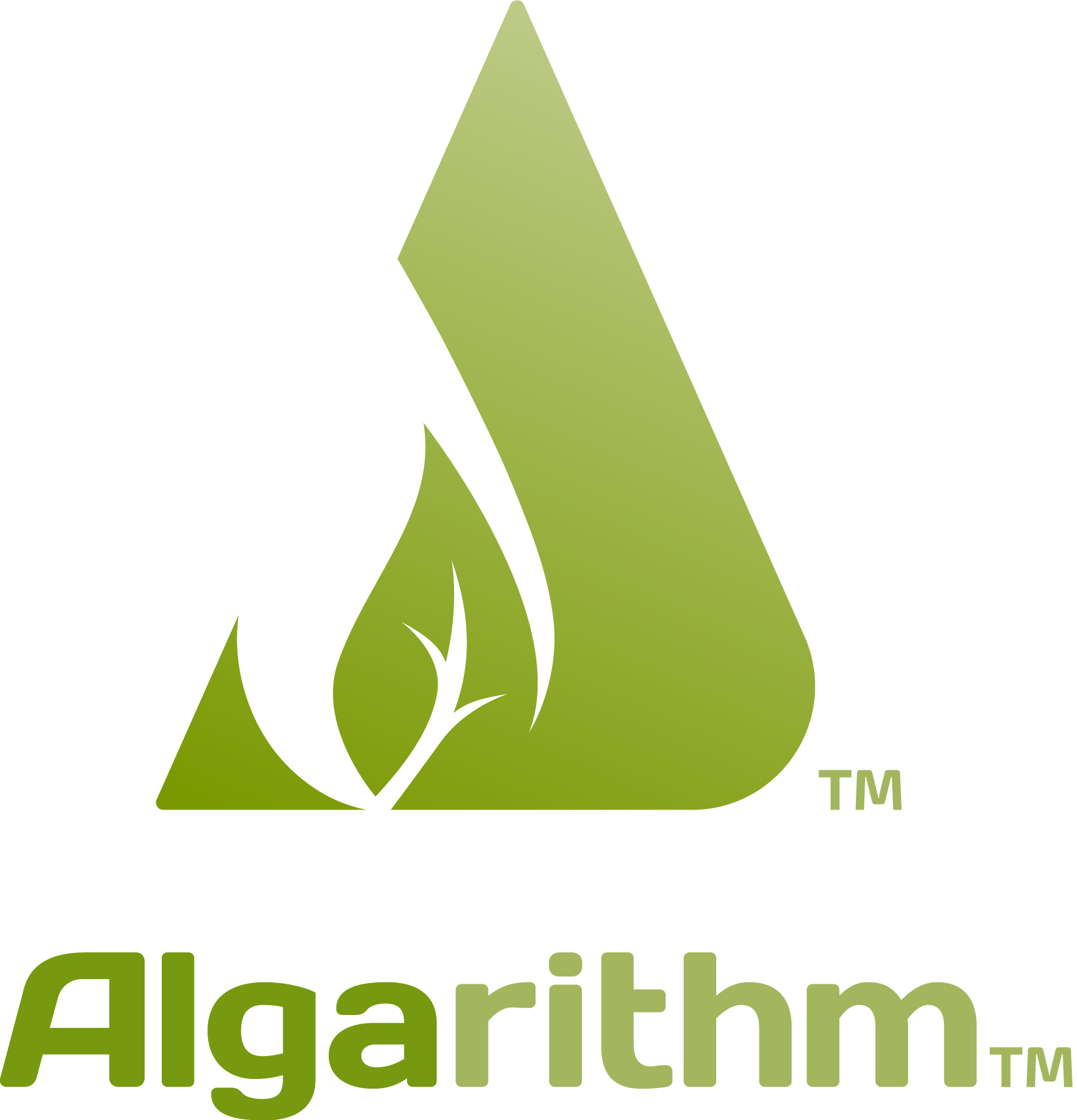 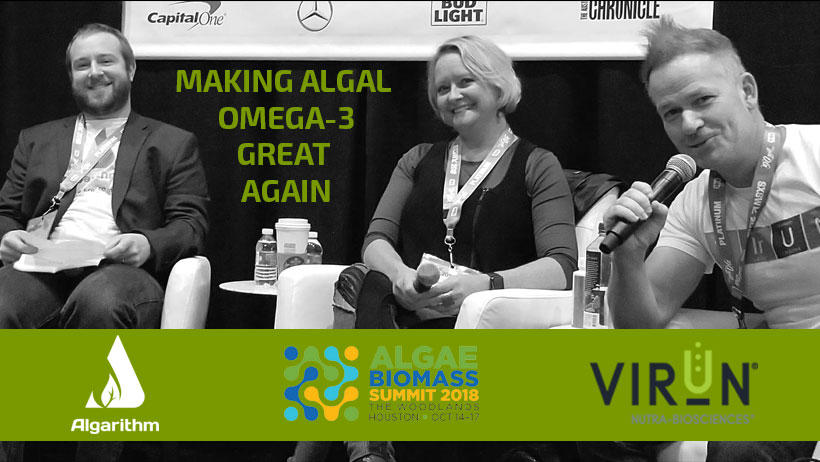 Founders of two of the functional food industry’s most innovative companies involved in the development and marketing of algae-based omega-3 products, Ben Kelly of Algarithm Ingredients and Philip Bromley of Virun Nutra-Biosciences, addressed attendees of the 2018 Algae Biomass Summit in Houston, Texas on October 15. The title of their presentation was “Making Algal Omega-3’s Great Again (O-MAGA)!”, during which they shared their history of successfully incorporating algae-derived omega-3s into foods, beverages, and dietary supplements, and also shared their thoughts and insights on growing the algal omega-3 market through strategic partnerships.

Around 2 years ago, well-aware of omega-3’s vital importance for the neurological development and overall health of growing children, and unwilling to give his own children omega-3 from marine sources because of potential contamination with heavy metals, Kelly became motivated to search out a non-fish source of omega-3; and discovered that the proper wild strain of algae grown using the proper protocol offered a clean, virtually odorless and tasteless source of omega-3 DHA. Kelly’s discovery led to the formation of his company, Algarithm, and shortly thereafter the formation of an industry-changing partnership with food, beverage, and supplement formulator and co-packager Philip Bromley of Virun Nutra-Biosciences.

Through the subsequent hard work of Kelly and Bromley and members of their teams, several novel algal omega-3 products were conceived that companies in the dietary supplement, food, and beverages sectors incorporated in their products. They include:


“People who want clean diets are typically frustrated that they can’t find a plant-based omega-3 that is not completely free of GM ingredients. When we tell customers that our omega-3 is harvested from wild-sourced strains of algae swimming in the pristine waters of Nova Scotia’s Bay of Fundy, it fairly quickly puts their GMO concerns to rest,” said Kelly. “Omega-3 doesn’t get any cleaner or more natural than that.”

“Thanks to our friends at Algarithm, we now have access to a sustainable source of pollutant-free, plant-derived omega-3 DHA,” said Bromley.  “The research we’ve done here at Virun enables us to easily introduce that health-promoting omega-3 fatty acid into foods, beverages, and nutritional supplements at an anticipated cost of less than $.10 per serving – and do it without creating a trace of fish taste, fish smell, or annoying fish burps.  We were happy to be able to introduce folks at the Algae Biomass Summit to our process for creating great-tasting, DHA-enhanced foods and beverages, and dietary supplements. We believe the technology we’ve evolved opens the doors to a world of new, healthy, algal   omega-3 enhanced consumer products.”

Algarithm™ is the Smart Source for Plant-based omega-3s providing high quality, algal, value-added omega-3 ingredients for a wide range of food, beverage, and dietary supplement (including infant) applications. As a DHA supplier that produces plant-based, toxin-free, and sustainable ingredients, we are revolutionizing functional ingredient sourcing in the food, beverage and dietary supplement industries. Algarithm’s™ AlphaMega3 algal DHA oil stands apart from other plant based DHA suppliers due to its flavor, superior stability, and odor characteristics (or lack thereof).

As a father to two girls, what drives Ben is the desire for all children having access to tasty and exciting omega-3 for cognitive and eyesight development free of heavy metals and contaminants coming from marine fish. That is the reason Ben co-founded Algarithm to deliver on this opportunity, along with Udaya Wanasundara, CSO, a father of two boys, and an expert in lipids and algal omega-3 science.

An entrepreneurial-minded business development professional, Ben has spent the past 6+ years in business development roles in the dietary supplement and food ingredient industry. Ben leads new business for Algarithm and POS Biosciences where he is responsible for implementing strategic sales and marketing initiatives and for collaborating with global partners. Working closely with both company’s industry-leading scientific teams, Ben serves a critical market prospecting role where he collaborates with and finds potential, strategic partners to further commercialize new ingredients and products. Ben was a Co-Founder of Algarithm and has been instrumental in securing partners as the company gains traction in new, lucrative markets; today he leads Algarithm as the Managing Director. He holds his B.A. from the University of New Brunswick and his M.P.A from the University of Saskatchewan. Ben’s partner Katie and their two daughters make their home in Saskatoon, Saskatchewan, Canada.

Founded in 2003, Virun was formed to create nutritious, great tasting and novel formulations for the food, beverage, supplement and pharmaceutical industries. Located in Pomona, California, Virun is a fully integrated research, production, and manufacturing facility, which quickly conceptualizes ideas to create innovative custom bulk blends and finished products for contract manufacturing.  Virun is the only biotechnology company that owns over 80 patents worldwide and develops technology around biochemistry practices. Its' technologies include Esolv® a clean-label claim emulsifier, OmegaH2O®, which incorporates omega-3 EPA DHA into clear, shelf-stable, clean label claim beverages without a fishy taste; Probiferrin®, a technology that increases the bio-availability and shelf-life of probiotics in powders and beverages; and other innovative solutions and brands, including O3 Omega® Smoothies, Viruns' own line of algal omega DHA MCT smoothies.

Born in Southern California, 1973, Philip Bromley lived, grew up and surfed in Ventura, California. Mr. Bromley majored in general Chemistry at San Diego State University, so he could continue surfing, and furthered his education under a biochemistry graduate program at SDSU. Mr. Bromley has more than 15 years of experience in Particle augmentation of proteins, peptides and non-polar active agents used in foods, beverages and drugs of which have been attributed toward improved delivery in application and in vitro. Mr. Bromley co-founded Virun® NutraBiosciences® in 2003. Mr. Bromley is an inventor named on at least 40 global patent and patent applications world-wide. In 2003, Mr. Bromley was the first to acknowledge and research the use of Transferrin’s to improve the oral bioavailability of naïve proteins, peptides and drugs including achieving greater than 61% oral bioavailability of human insulin compared to i.v. injection. Mr. Bromley’s patent portfolio includes “compositions” used to encapsulate non polar compounds that dissolve into food and beverage applications that are clear, shelf stable and safe. Mr. Bromley has invented new diester forms of Vitamin E analogues, Esolv®, which is amphiphillic (oil and water soluble) and therefore can deliver non polar compounds into foods and beverage applications with ease, clean label claim and increased oral bioavailability. Esolv® has been shown to not absorb into blood plasma in healthy adults and thus is a suitable encapsulator to replace emulsifiers due to Esolv® safety and toxicology, whereas, commonly used alternatives such as polysorbates and detergents do absorb into blood plasma. Mr. Bromley has joint patents with fortune 400 companies, such as Hormel Foods. Mr. Bromley continues his research to improve the pharmacokinetics and dynamics of drug delivery.